Is it too early to post a throwback? I promise this one is legitimate and includes embarrassing childhood photos. That’s a yes? Cool.

In 2007, my family and I took a two-week trip around Central Europe. In true summer time fashion, we had packed maximum shorts (think Rome in August) and minimal outerwear (think one hoodie at best). So on the morning prior to travelling up Mount Titlis in Engelberg, 12-year-old Grace layered on ALL of her shirts and a jacket to combat the ominous mountain air. To say the least, it was not enough. Views were totally worth it, chilled appendages were not.

Fast forward to 2017, a decade apart and most definitely wiser about attire choices. Decked out in my trusty old Canada Goose and snowpants to match, I skied the narrow runs down the mountain. It didn’t even occur to me that I had visited the same location 10 years prior. It wasn’t until I saw the very obvious 范冰冰 (Chinese) advertisement at the top of the gondola did I realize I sat in these exact cable cars with my mother and grandparents. All the memories flooded back to me. Look below for evidence! 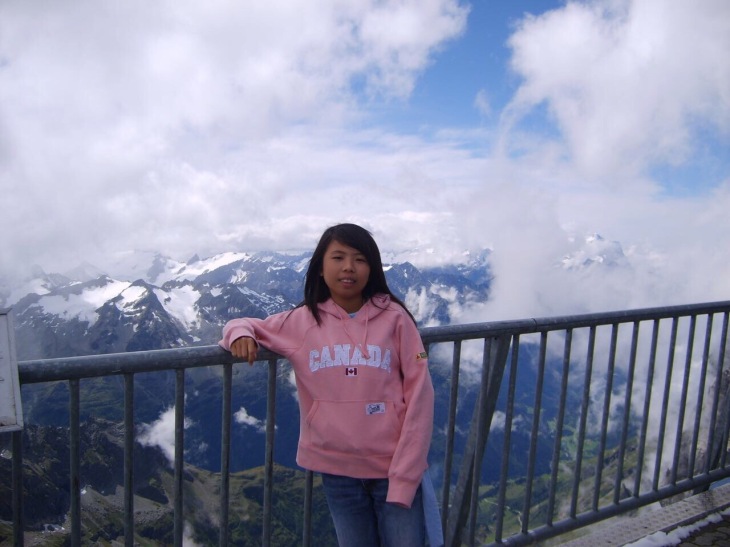 Grace in 2007, wearing literally everything in her suitcase for top of Mt. Titlis in August. 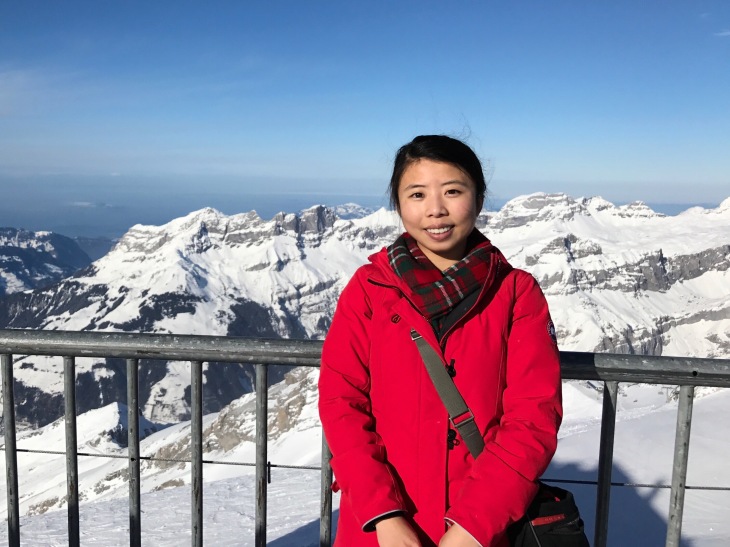 Grace in 2017, wearing literally one t-shirt and a jacket for skiing at Mt. Titlis in February.

For those who are more interested in the skiing portion of my excursion, I highly recommend experiencing the Swiss Alps in all of its glory. When is the best time to go? Anytime! You’d be surprised by the amount of snow on top of the mountains and glaciers during June. However, the most popular time is in March, right before Easter. Europe and its perchance for consecutive holidays has created a perfectly concrete week of unprecedented travel among the EU population. In March, the weather in high altitudes is not as harsh as winter months, but still cold enough to maintain optimal snow for skiing. I personally went during February and felt perfectly comfortable. There is nothing more satisfying that running into a fire-warmed log cabin and sipping hot chocolate after a long day on the slopes. Think Christmas vibes all-year round, without the obnoxious red and green decorations.

Our travel group consisted of various exchange and domestic students, totaling up to 10 people. We had created a group chat a couple of days prior to the event and planned out a route that everyone agreed on. So that cold Saturday morning, my roommates and I dragged our butts out of bed at 5:00 to catch the earliest train out of Zürich HB towards Engelberg. The funny story of the day was actually losing one of our friends. Will had accidently boarded the wrong train in the opposite direction towards Chur! Making the most of the situation, he got off in Luzern and explored a little before heading back in the right direction. Luckily he eventually made it to the slopes before noon and didn’t even get checked by SBB security. I’ll be talking about the marvelous (read as: stringent) transportation system of Switzerland in another post. On that note, people looking to ski and travel should research the Snow’n’Rail Pass offered by SBB. They often combine lift and travel tickets together and this can save you a pretty penny. This package eliminates the hassle of purchasing separate return tickets and gets you on the slopes sooner.

Once at Engelberg, there was a shuttle bus that took you to the base of the mountain. However, wanting to assimilate into Swiss society, we decided to walk the 20 minutes to enjoy the small ski town scenery. In all honesty, we probably looked like a bunch of tourists by stopping every couple hundreds of feet to take photos. I didn’t bring my DSLR for obvious reasons, but it would have been difficult to capture the quaint nature of Engelberg through a camera lens. In later posts, I’ll be comparing the numerous ski towns that I visited throughout my exchange. The general consensus is definitely suggesting you visit these places for yourself. The storybook feeling takes you back a step into simpler times and I appreciated the breath of fresh air away from the city.

On our way to Mt. Titlis, just outside of Old Town Engelberg.

With the combo ticket, I just needed to rent the equipment at the base of Mt. Titlis. Only 3/10 of our group had their own skis and snowboards, but they graciously went up the mountain first to scout out good tracks. While our wait, my friends and I could see the mixture of worlds in the small rental shop. Asian tourists piling on down jackets to avoid the cold and European skiers rushing through the space to maximize ski time. We heard various languages and chuckled when we eavesdropped onto a conversation we understood. One experience that stood out during our wait was a curt conversation with an elderly Austrian man. He stood in front of us in line and suddenly turned around to comment, “You speak English very well for Japanese people”. From the expression on his face and tone of voice, he said this with curiosity, not malice. In admittance, our group of skiers was mainly composed of Asian American backgrounds. Back in North America, this kind of statement could have been interpreted as insulting, but in Europe, where Asians were scarce, Europeans were genuinely inquisitive about our language skills. We later had a pleasant conversation explaining our backgrounds and shook it off.

So up the mountain we went, with our student-discounted ski rentals, and our snow adventures began. Although we left home at the crack of dawn, we didn’t start our first run until 10:00. Between the line-ups and RFID transfers, we finally made it up midway to start on an easy slope. The pro-skier of our group, Alex, had already done a killer course at the top of the mountain, maneuvering through moguls. Apparently he wanted to do leg day early. He joined midway down to actually save my sorry ass. Having only skied on Blue Mountain in Ontario, Canada, that molehill was nothing in comparison to the steep inclines of the Swiss Alps. I had unfortunately wiped out in the most dramatic fashion possible. Shout out to Zach for sitting with me while I tried to figure out which way was up! Afterwards, my friends had recruited our other resident skier, Nicoló, to literally coach me down the slope. It’s safe to say that I learned my lesson and will be more careful next time! Thanks guys!

Views from the slopes – would not recommend skiing and taking photos at the same time.

I won’t delve into too much detail of our day on Mt. Titlis. I want you to go and experience it for yourself. The only suggestion that I may interject is to buy tickets early. You’ll be fighting a lot of tourists up the mountain, so pack light and be quick! At the very top, you can check out the glacier or walk across the cliff on a suspension bridge. Make sure to travel on the Rotair Stand, which revolves 360 degrees during a five-minute journey to the summit. You maybe tempted to skip over the cheesy Swiss apparel photoshoot, but definitely try on a hat and pose for a funny picture. You already committed so much to get to the top, might as well maximize on the activities. Overall, the trip was well worth the Swiss francs. With the Halb-Tax, Gleis 7, and student discount on rentals, the entire trip cost less than 150CHF. For the experiences, I’d budget an additional 50CHF for entrance tickets. Even though I was admittedly sore for days, the trip was well worth it! 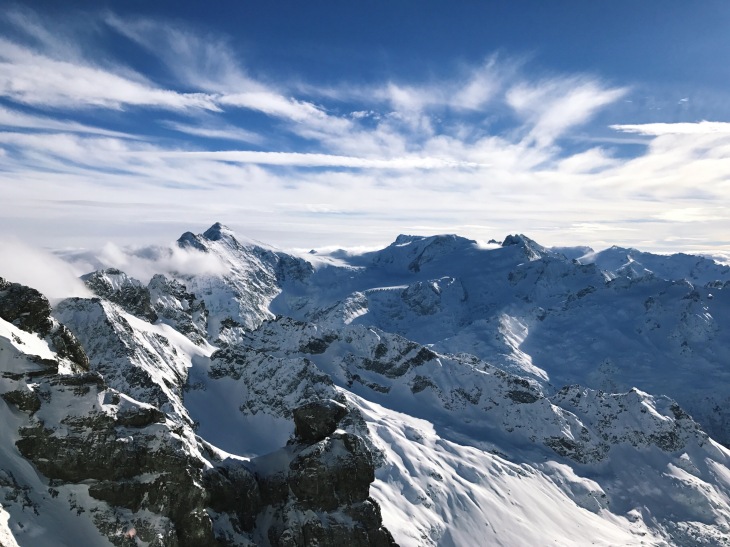 View from the summit of Mt. Titlis. Definitely not in The 6ix anymore.

And there you have it! Once we all congregated at the base of the mountain, the 10 of us attempted to find economical food choices for dinner. Colin and I actually walked the entire village and found nothing more than expensive Italian and questionable Mexican. The train ride back was decidedly reserved for well-deserved rest. One by one, our friends got off at different stations and my original building mates trudged back to our residences. Settled in and beers in hand, we cheered to the promised future adventures we’d have in Switzerland together.